WE CAN DO BETTER 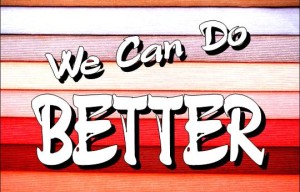 THE WORLD OFFERS THINGS IT CANNOT PROVIDE.  HOLLOW, EMPTY AND TEMPORARY PROMISES.   WE CAN DO SO MUCH BETTER BY TRUSTING GOD’S PROMISES.

1. GOD HAS PROVIDED FOR US BLESSINGS THAT ARE BETTER.

A. WE HAVE BLESSINGS FROM GOD THAT ARE BETTER THAN THOSE OF THE WORLD.

Psalms 37:16  A little that a righteous man hath is better than the riches of many wicked.

A rich man built house next to a poor man.  The poor man’s home was small,  with a low ceiling and just a couple windows.  He had an old tube-type TV that somehow he kept going.  He used a hand operated can opener in his kitchen, and he had a fan instead of electric air conditioning.  He was happy.  This rarely broke down.  For years the rich man had tried to have the poor man’s house taken away or condemned.  He said it would hurt his own property values.

The rich man on numerous occasions would send some satellite technicians or hi-tech repairmen to the poor man’s house, just as a joke to amuse himself.  One day, a storm hit the area, the lightening knocked out the rich man’s satellite system, somehow caused his security system to lock down, and he could not use his hi-tech telephones.  Where did he go ?

He had to climb the wrought iron fence to the poor man’s house and asked if he could use his phone…which was a primitive land-line.  The poor man was rejoicing after he left, happy that many of the comforts that he enjoyed were still running, while the rich man’s things had been frozen.

Proverbs 15:16  Better is little with the fear of the LORD than great treasure and trouble therewith.

B. WE HAVE A BETTER COUNTRY.

Hebrews 11:16  But now they desire a better country, that is, an heavenly: wherefore God is not ashamed to be called their God: for he hath prepared for them a city.

Hebrews 10:34  For ye had compassion of me in my bonds, and took joyfully the spoiling of your goods, knowing in yourselves that ye have in heaven a better and an enduring substance.

C. WE HAVE A BETTER COVENANT AND BETTER PROMISES THAN THOSE LIMITED TO ISRAEL.

Hebrews 8:6  But now hath he obtained a more excellent ministry, by how much also he is the mediator of a better covenant, which was established upon better promises.

God promised to Israel a land.  Israel had to make the tents.  There would be storms and unfriendly neighbors.  But, it was a blessing.  Even BETTER is the promise of God of a city who Builder and Maker is God, and where nothing deteriorates, and Jesus has built mansions there for us.

D. WE HAVE WISDOM FROM GOD THAT TELLS US OUR ACTUAL CONDITION.

HE DOESN’T LIE ABOUT OUR NEEDS.  WE ARE TOLD THAT WITHOUT HIM, WE ARE NOTHING.   HE REVEALS THAT WE SHOULD BE HUMBLE.

Proverbs 16:19  Better it is to be of an humble spirit with the lowly, than to divide the spoil with the proud.

3. WE HAVE A BETTER PATH IN THIS WORLD THAN OTHERS.

A. SUFFERING HAS A BETTER SIDE TO IT.

B. IT IS BETTER TO BE WITH THE LORD THAN TO BE ON EARTH.

Philippians 1:23  For I am in a strait betwixt two, having a desire to depart, and to be with Christ; which is far better:

1 Thessalonians 4:13  But I would not have you to be ignorant, brethren, concerning them which are asleep, that ye sorrow not, even as others which have no hope.

”WE CAN DO BETTER”