HE GAVE YOU POWER 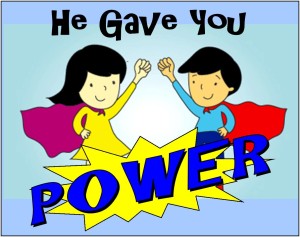 ONE OF THE GREAT GIFTS WHICH GOD GIVES TO US AT SALVATION IS AUTHORITY.

But as many as received him, to them gave he power to become the sons of God, even to them that believe on His Name:

IN THIS WORLD THERE ARE TOO MANY PEOPLE WHO ARE FRUSTRATED AND WITHOUT HOPE.   OUR HOPE IS REAL AND STRONG !   WHAT POWER IS GIVEN TO THE SONS OF GOD ?

Matthew 28:18 And Jesus came and spake unto them, saying, All power is given unto me in heaven and in earth.

PEOPLE–EVEN RELIGIOUS PEOPLE–WHO ARE NOT SAVED DO NOT HAVE THIS POWER, OR AUTHORITY.

Many people talk about it today, even claiming that they have it. Yet, what they have are standards that change as the world changes, and even those they cannot keep because they really don’t have the power to do it.

2 Timothy 3:5 Having a form of godliness, but denying the power thereof: from such turn away.

THIS IS A GENERATION THAT HAS LEARNED TO MAKE EXCUSES FOR THEIR BEHAVIOR RATHER THAN REPENTING OF IT AND GETTING POWER OVER THEIR PROBLEMS !

1. HE GAVE YOU AUTHORITY TO WIN OVER SIN.

A. THE DEVIL FLEES FROM THE POWER OF GOD, BUT LAUGHS AT THOSE WHO ONLY THINK THEY HAVE IT.

James 4:7 Submit yourselves therefore to God. Resist the devil, and he will flee from you.

B. THERE ARE WAYS TO AVOID TEMPTATION. WHEN YOU ARE IN PRAYER, WHO ARE YOU SPEAKING TO ?

ARE YOU CONSCIOUS OF HIM ? THE DEEPER YOU PRAY, IS YOUR FOCUS MORE ON HIM ? WHEN YOU ARE FOCUSED MORE ON HIM, ARE YOU LIKELY TO PICK UP THE SIN AND DO IT ? NO.

HAVE YOU EVER LOOKED BACK ON SOMETHING YOU DID AND LATER REALIZED THAT IT WAS WRONG–ALTHOUGH AT THE TIME YOU DID NOT KNOW THIS ?  YOU GREW IN YOUR KNOWLEDGE OF RIGHT AND WRONG. KEEP GROWING AND YOU WILL HAVE LESS AND LESS TO LOOK BACK ON TO SAY, “I DIDN’T KNOW IT WAS WRONG.”

SOME THINK THEY KNOW ENOUGH ALREADY AND NEVER NEED ANYTHING REPEATED.

A YOUNG MAN I ONCE KNEW WAS BEING TAUGHT HOW TO BE A SHORT ORDER COOK AT A BREAKFAST RESTAURANT.  THE COOK WAS SHOWING HIM HOW TO MAKE PANCAKES WHEN HE SAID, “I KNOW THAT ALREADY.” “WELL, HOW DO YOU KNOW IT ?” THE COOK ASKED.  “I SAW YOU DO IT ONCE.” THEN THE COOK SAID, “OK, GO DO IT YOURSELF, AND LET’S SEE.”  THE YOUNG MAN PUT PANCAKE MIX INTO THE MIXING BUCKET, THEN HE ADDED SOME WATER, THEN EGGS, THEN MILK AND WATER, AND THEN TURNED ON THE MIXER.  THE COOK WAS GETTING UPSET.  THIS ARROGANT YOUNG MAN LOOKED AT COOK, AND SAID, “SEE, I TOLD YOU I SAW THIS BEFORE, SO I KNOW HOW TO DO IT.” THE COOK THEN ADMITTED THAT WHILE THE YOUNG MAN MAY HAVE SEEN IT BEFORE, BUT HE FORGOT SOME IMPORTANT FACTORS.  THERE HAD TO BE A SPECIFIC AMOUNT OF MILK AND WATER ADDED, AND THE MIXING SHOULD HAVE BEEN FOR A SET PERIOD OF TIME. THE YOUNG MAN WAS NOT WILLING TO LEARN.

SOME CHRISTIANS THINK THEY KNOW ENOUGH WHEN THEY CAUGHT ONLY PARTS OF THE TRUTH, AND ARE LEFT WITHOUT EFFECTIVE PROTECTION FROM TEMPTATION.

2. HE GAVE YOU AUTHORITY TO DO THE WORK OF GOD.

It is the official sanction by a higher authority for you to use power.

A. THE POWER TO LIVE RIGHT.

Without the Gospel being seen and using its’ authority, society will crumble into greed and violence. THIS AFFECTS YOUR SOCIETY. Religious talk is cheap and powerless. But, those whose lives are changed and live according to God’s plan for their lives make a big difference in society !

B. THIS AFFECTS YOUR FAMILY.

2 Peter 1:3 According as His divine power hath given unto us all things that pertain unto life and godliness, through the knowledge of him that hath called us to glory and virtue:

YOUR AUTHORITY TO PUT GOD FIRST IN YOUR LIFE FIRST OF ALL GETS PEOPLE’S ATTENTION, AND SECONDLY, IT MAKES THEM REALIZE THAT WHAT YOU HAVE IS REAL.

C. THIS AFFECTS BROTHERS AND SISTERS IN CHRIST.

Not to condemn, but to bring people up to Christ.

2 Corinthians 10:8 For though I should boast somewhat more of our authority, which the Lord hath given us for edification, and not for your destruction, I should not be ashamed:

D. IT AFFECTS YOUR LIFE’S PURPOSE.

We are required to do the purpose of God—walking in faith—with Power !

2 Thessalonians 1:11 Wherefore also we pray always for you, that our God would count you worthy of this calling, and fulfil all the good pleasure of his goodness, and the work of faith with power:

3. HE GAVE YOU AUTHORITY TO CALL UPON HIM FOR HELP.

I WAS IN PERU AT A GLASS-FRONT HOTEL, AND MOBS WERE MARCHING BY. THEY WERE COMMUNISTS, PARADING FOR THEIR POLITICAL CANDIDATE, CARRYING SHOVELS AND PICK AXES. THEY CHANTED “YANKEE GO HOME.” THE THOUGHT OCCURRED TO ME THAT IF THIS GETS OUT OF HAND–WHICH IT OFTEN DOES IN PERU–I HAVE NO ONE TO CALL.

A. WE HAVE BEEN GIVEN AUTHORITY TO HAVE BOLDNESS THE DAY OF JUDGMENT.

1 John 4:17 Herein is our love made perfect, that we may have boldness in the day of judgment: because as He is, so are we in this world.

B. WE HAVE BEEN GIVEN AUTHORITY TO COMPLETE THE MISSION GOD SENT US TO ACCOMPLISH.

Mark 13:34 For the Son of man is as a man taking a far journey, who left His house, and gave authority to His servants, and to every man his work, and commanded the porter to watch.