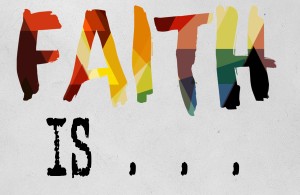 And the scripture, foreseeing that God would justify the heathen through faith, preached before the gospel unto Abraham, saying, In thee shall all nations be blessed.

1. FAITH CAN BECOMES A PROJECT FOR MORE THAN ONE.

SOMETIMES IT TAKES TWO OR MORE PEOPLE TO BRING THE RESULTS OF ONE PERSON’S FAITH.

Romans 4:19-20 And being not weak in faith, he considered not his own body now dead, when he was about an hundred years old, neither yet the deadness of Sara’s womb: He staggered not at the promise of God through unbelief; but was strong in faith, giving glory to God;
Hebrews 11:11 Through faith also Sara herself received strength to conceive seed, and was delivered of a child when she was past age, because she judged him faithful who had promised.

WASN’T MERELY FAITH IN HER OWN REVERSAL OF AGE, BUT FAITH THAT ABRAHAM WOULD RECEIVE THIS BLESSING, TOO. CAN’T HAVE ONE WITHOUT THE OTHER TO PRODUCE CHILDREN.

B. FAITH USUALLY REQUIRES MORE THAN ONE PERSON TO PROVE IT TO BE REAL.

2 Timothy 1:5 When I call to remembrance the unfeigned faith that is in thee, which dwelt first in thy grandmother Lois, and thy mother Eunice; and I am persuaded that in thee also.

FAITH NEEDS TO BE EXPERIENCED BY MORE THAN ONE SOMETIMES.
***For example, praying together is vital for the effectiveness and safety of those ministering for the Lord overseas in such dangerous and harsh conditions.

C. FAITH IS THE ACTION OF BELIEVING.

Romans 4:5 But to him that worketh not, but believeth on him that justifieth the ungodly, his faith is counted for righteousness.

THE STRONGEST EMOTIONS ALONE WILL NOT PRODUCE FAITH. FAITH IS A COMBINATION OF ALL THREE PARTS OF A PERSON. SOULD, SPIRIT AND BODY.

**The soul has to have information, the spirit has to be willing, and the body is involved in asking.

Romans 10:10 For with the heart man believeth unto righteousness; and with the mouth confession is made unto salvation.

2. HOW DOES A PERSON GET THIS KIND OF FAITH ?

A. YOU HAVE TO KNOW THE PERSON YOU HAVE FAITH IN.

SOME FAITH CAN COME OUT OF SEPARATION, OR DESIRE. BUT THE DEEPEST, MOST PRODUCTIVE AND MOST IMPORTANT TYPE OF FAITH COMES OVER TIME WHERE TRUST HAS BEEN BUILT.

Ezekiel 14:13-16 Son of man, when the land sinneth against me by trespassing grievously, then will I stretch out mine hand upon it, and will break the staff of the bread thereof, and will send famine upon it, and will cut off man and beast from it: Though these three men, Noah, Daniel, and Job, were in it, they should deliver but their own souls by their righteousness, saith the Lord GOD. If I cause noisome beasts to pass through the land, and they spoil it, so that it be desolate, that no man may pass through because of the beasts: Though these three men were in it, as I live, saith the Lord GOD, they shall deliver neither sons nor daughters; they only shall be delivered, but the land shall be desolate.

3. YOU HAVE TO COMMIT THINGS TO THE LORD TO BUILD YOUR FAITH.

A. IF YOU HAVE NEVER COMMITTED SOMETHING INTO THE HAND OF SOMEONE ELSE, HOW DO YOU KNOW YOU CAN TRUST THEM ?

Only if you have seen them to be trustworthy in other people’s relationships.

B. THE MORE VALUABLE THE OBJECT YOU COMMIT TO SOMEONE, THE GREATER FAITH YOU CAN HAVE IN THEM, IF THEY PROVE TO BE TRUSTWORTHY.

Luke 16:11 If therefore ye have not been faithful in the unrighteous mammon, who will commit to your trust the true riches?

C. THE MORE OFTEN YOU PLACE TRUST IN THE PERSON, THE MORE FAITH YOU CAN HAVE, BECAUSE OF THE TRACK RECORD OF THE PERSON.

CONSIDER THE PARABLES OF THE POUNDS AND THE TALENTS. EACH WAS GIVEN ACCORDING TO THE AMOUNT OF TRUST THE MASTER HAD.

Luke 12:48 But he that knew not, and did commit things worthy of stripes, shall be beaten with few stripes. For unto whomsoever much is given, of him shall be much required: and to whom men have committed much, of him they will ask the more.

PAUL HAD COMMITTED ALL HIS VALUABLES TO THE LORD. HIS SOUL, SPIRIT, BODY. HE KNEW THE LORD WOULD TAKE CARE OF HIM.

2 Timothy 1:12 For the which cause I also suffer these things: nevertheless I am not ashamed: for I know whom I have believed, and am persuaded that he is able to keep that which I have committed unto Him against that day.