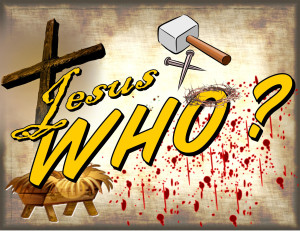 WHY WOULD PEOPLE EVER ACCEPT THE WRITINGS OF MEN WHO WERE NOT PRESENT WHEN JESUS WALKED ON THE EARTH OVER THE TESTIMONIES OF EYEWITNESSES, SUCH AS THE APOSTLES IN SCRIPTURE ? SHOULD WE VALUE THE OPINION OF MEN WHO SIN OVER THE DIVINELY PRESERVED WORD OF GOD ? OF COURSE NOT.

TODAY, THERE ARE MANY “EXPERTS” WHO HAVE DECIDED TO JUDGE EVENTS WHICH OCCURED 2000 YEARS AGO, AS IF THEY COULD ACCURATELY RECONSTRUCT EVENTS WHICH TOOK PLACE 100 YEARS AGO. THEY CANNOT. PREACHERS, BOOK-WRITERS, SAGES, THEOLOGIANS, ARCHEOLOGISTS, AND EVEN RABBI’S HAVE NO MORE INFORMATION ABOUT THE LIFE AND CLAIMS OF JESUS THAN WE DO.

IF WE ARE WISE, WE WILL BASE OUR BELIEF UPON SOMETHING OF SUBSTANCE–THE BIBLE.

RELIGION CAN BE FROM MEN OR FROM GOD.

GOD IS NOT AGAINST TRUE RELIGION. TODAY, MANY PROFESSING CHRISTIANS CLAIM THEY HATE RELIGION.

James 1:26-27 If any man among you seem to be religious, and bridleth not his tongue, but deceiveth his own heart, this man’s religion is vain. Pure religion and undefiled before God and the Father is this, To visit the fatherless and widows in their affliction, and to keep himself unspotted from the world.

FACT: GOD DOES NOT CONDEMN RELIGION. HE CONDEMNS FALSE RELIGION.

FALSE VERSUS TRUE RELIGION:
Man has made up stories about giants, dragons, monsters, and a host of other creatures for us to read about in literature. But, while there might have been some substance to an initial report about these things, over many years, they have been changed and changed many times. The descriptions of them today would not even be recognizable to the people who lived when some minor episode actually took place. But, this is what man’s imagination does very effectively. He makes up things and exaggerates to the best of his flawed intellect. That is why it is such a blessing to have the testimony of eye-witnesses, and a book about Jesus which was written by the breath of Almighty God. We know that those things are Truth and not flawed by man’s desire to exaggerate stories.

FIRST OF ALL, Let us consider the concept that Jesus is not one of three gods attributed to a Trinity. Some people refer to Him as one of the “persons” of the God-head. God is One. There are not three gods. Only One. And, the descriptions of the Father, Son, and Holy Spirit are manifestations of the One Almighty God, not three.

Perhaps one of the more difficult aspects of understanding this concept is the idea that God very often reveals one manifestation of Himself more than another in certain areas of Scripture. For an example, He may emphasize His Spirit in one place, leading those who have not studied details to think that His Spirit is one God and there remains two others.

Another difficult thing for mere human beings to comprehend is how the same Person can relate to each part of Himself. If we understood everything about God, we would certainly have jumped from human to Divine intelligence. We can only hope to understand a small portion of the greatness of Almighty God. He is obviously able to separate Himself into three clearly distinguishable parts. We humans would have a difficult time doing that, although in some aspects, we do it without realizing it.
There are many writers with an axe to grind against the New Testament who have falsely assumed that all Christians believe in the three-god Trinity concept. The very foundation of their argument is flawed, so the ideas which they build against the claims of Jesus are also flawed.

There is no mention of any “Trinity” with three separate gods in the Bible. Not all Christians believe in this doctrine. This term came into being through the Roman Catholic Church, and its efforts to instruct pagans who often had multiple gods. It was assumed that was easier for them to understand a multi-god entity. In the Bible, however, God is referred to by many names, and the total being of God is referred to on several occasions as the “Godhead.”

1. THE WORD “GOD” IN THE NEW TESTAMENT IS USED MOST TIMES WHEN REFERRING TO THE FATHER, OR THE VERY SOUL OF THE ALMIGHTY.

Ephesians 1:17 That the God of our Lord Jesus Christ, the Father of glory, may give unto you the spirit of wisdom and revelation in the knowledge of Him:

2. ON FEWER OCCASIONS, THE USE OF THE WORD “GOD” REFERS TO THE ENTIRE BEING OF THE ALMIGHTY.

John 13:3 Jesus knowing that the Father had given all things into his hands, and that he was come from God, and went to God;

JESUS MADE IT CLEAR THAT HE WAS THE PHYSICAL MANIFESTATION OF THE FATHER.

JESUS DECLARED THAT HE CAME OUT FROM GOD.

John 16:27 For the Father Himself loveth you, because ye have loved Me, and have believed that I came out from God.   DOES THE BIBLE SAY THAT THIS WAS THE FATHER ? YES !   1 John 4:14 And we have seen and do testify that the Father sent the Son to be the Saviour of the world.

THE BIBLE MAKES IT CLEAR THAT THE TERM “GOD” REFERS TO THE FATHER.

JESUS IS NOTED AS BEING A REVELATION OF THE GODHEAD.  (i.e., being God in every way)

Romans 1:20 For the invisible things of Him [Jesus] from the creation of the world are clearly seen, being understood by the things that are made, even His eternal power and Godhead; so that they are without excuse:

Colossians 2:9 For in Him [Jesus] dwelleth all the fulness of the Godhead bodily.

THE OLD TESTAMENT SAYS IT. It describes God as the One Who created the heavens and the earth.  Isaiah 42:5 Thus saith God the LORD [HEBREW=YAHWEH”] , He that created the heavens, and stretched them out; He that spread forth the earth, and that which cometh out of it; He that giveth breath unto the people upon it, and spirit to them that walk therein:

THE BIBLE IDENTIFIES WHO THAT GOD IS.

Colossians 1:14-19 In whom we have redemption through His blood [obviously speaking of Jesus], even the forgiveness of sins: Who is the image of the invisible God, the firstborn of every creature: For by Him [context says that “Him” is Jesus] were all things created, that are in heaven, and that are in earth, visible and invisible, whether they be thrones, or dominions, or principalities, or powers: all things were created by Him, and for Him: And He is before all things, and by Him all things consist. And He is the head of the body, the church: [again, this can only be speaking of Jesus] Who is the beginning, the firstborn from the dead; that in all things He might have the preeminence. For it pleased the Father that in Him should all fulness dwell;

So, according to this Scripture, Jesus was the One Who created the heavens and the earth, etc., and it clearly states in other passages that the Creator is God. Therefore, since the Bible says that Jesus was the Creator, He is God.

Understanding the nature of God–that is, that He has three parts within the same Person, helps to explain the Hebrew language use of “Elohim” [a plural word, translated “God”} in

Genesis 1:26. And God said, Let us make man in Our image, after Our likeness: and let them have dominion over the fish of the sea, and over the fowl of the air, and over the cattle, and over all the earth, and over every creeping thing that creepeth upon the earth.

It is significant that God revealed to us that He has more than one part by using a plural word to describe Himself. He did not want it left to theologians, sages, and gurus to come up with ideas about who He is. He reveals Himself in His Own way. Through the Word of God.

IMPORTANT NOTE: The word LORD in the Old Testament is almost always an English language translation of the Hebrew word, “JEHOVAH.” The English translators used the word LORD (in all capital letters to differentiate from a simple term of respect and authority) instead of a literal translation because they were afraid that due to the numerous times JEHOVAH appears in the O.T., it would be “vain repetition” of God’s Name to use it so many times. Whether we agree with this logic, or not, it was the way it was done.

Now, we find that when it comes to physical appearances, creation of everything, and many other areas, that the word LORD appears. We clearly understand from Scripture that it was Jesus who created and appeared physically to O.T. people. Therefore, when the Name LORD is translated in the O.T., we understand that it refers to Jesus. In other words, JEHOVAH is the Name by which He revealed Himself in the Old Testament Scriptures.

THE PHYSICAL ATTRIBUTES OF MAN (MADE IN HIS IMAGE) REVEAL THAT GOD MUST HAVE A PHYSICAL ASPECT, AS WELL.

The plural use of the word Elohim in Genesis 1:26 speaks of making man in “Our likeness.” We see this mentioned as a complete man, but having three parts, in the image of God.

1 Thessalonians 5:23 And the very God of peace sanctify you wholly; and I pray God your whole spirit and soul and body be preserved blameless unto the coming of our Lord Jesus Christ.

***Since man not only has a spiritual and soulish nature, but a physical nature, too, we understand that since man was made in God’s image, God Himself must have these attributes, as well.

WHEN THE BIBLE SPEAKS OF “GOD” IN MOST CASES, IT IS REFERRING TO THE FATHER, NOT THE ENTIRE GODHEAD.

IS JESUS IDENTIFIED AS PART OF GOD IN THE OLD TESTAMENT ?

Isaiah 9:6 For unto us a child is born, unto us a son is given: and the government shall be upon his shoulder: and his name shall be called Wonderful, Counsellor, The mighty God, The everlasting Father, The Prince of Peace.

IS JESUS IDENTIFIED AS GOD IN THE NEW TESTAMENT ?

DID JESUS CLAIM TO BE KNOWN BY OLD TESTAMENT REVELATIONS ?

HE WAS KNOWN TO ABRAHAM AT THE TIME ISAAC WAS OFFERED.
John 8:54-58 Jesus answered, If I honour myself, my honour is nothing: it is my Father that honoureth me; of whom ye say, that he is your God: Yet ye have not known him; but I know him: and if I should say, I know him not, I shall be a liar like unto you: but I know him, and keep his saying. Your father Abraham rejoiced to see my day: and he saw it, and was glad. Then said the Jews unto him, Thou art not yet fifty years old, and hast thou seen Abraham? Jesus said unto them, Verily, verily, I say unto you, Before Abraham was, I am.

DID JESUS CLAIM TO BE THE “I AM” OF THE OLD TESTAMENT ?

Exodus 3:14 And God said unto Moses, I AM THAT I AM: and he said, Thus shalt thou say unto the children of Israel, I AM hath sent me unto you.

IN THE OLD TESTAMENT, THE LORD (YAHWEH) CLAIMS TO BE FIRST AND LAST.

Isaiah 44:6 Thus saith the LORD the King of Israel, and his redeemer the LORD of hosts; I am the first, and I am the last; and beside me there is no God.
Isaiah 48:12-13 Hearken unto me, O Jacob and Israel, my called; I am he; I am the first, I also am the last. Mine hand also hath laid the foundation of the earth, and my right hand hath spanned the heavens: when I call unto them, they stand up together.

WHO CLAIMED TO BE THE FIRST AND LAST IN THE NEW TESTAMENT ?