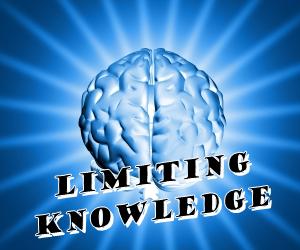 The person without Christ bases his or her life only on what he knows—or, so say many people today.  The Believer in Christ bases his ideas on what the Bible says.  That is called “faith.”  Why stay limited to the idea that “This is all I know” ?  Jesus offers us so much more !

Just in case you might think this isn’t important, think of all those people who have bad marriages because their parents were abusive, argumentative, unloving, had warped ideas, etc.  Think of all the kids growing up in homes where drugs are used, and that is their environment in the neighborhood, too.  What is their defense for that ?  “This is all I know.”

Sadly, many Christians who have not yet learned how to walk by faith also use the “This is all I know defense.”

Many people fall back on the idea that they were raised in a church or in an environment where miracles were not expected nor seen.   On the basis of their upbringing, they do not have an expectation for things miraculous or powerful.  How many miracles did the disciples see before they began walking with the Lord ?   Look what He was able to do with a few little fish.

Mark 8:7-9  And they had a few small fishes: and He blessed, and commanded to set them also before them. So they did eat, and were filled: and they took up of the broken meat that was left seven baskets. And they that had eaten were about four thousand: and He sent them away.

A. MANY RELIGIOUS PEOPLE HAVE A HEAD-KNOWLEDGE,  BUT NO PERSONAL EXPERIENCE WITH THE POWER OF GOD.

Mark 12:24  And Jesus answering said unto them, Do ye not therefore err, because ye know not the scriptures, neither the power of God?

Saul (later to be called Paul), had a great knowledge of Scripture, but he chose what he wanted to believe and threw out the rest.   UNTIL he met Jesus personally on the Damascus Road.

B. TRUE POWER IS USELESS WITHOUT IT BEING EXERCISED.

Some Christians guilty of having the same power of Elijah or Elisha in them, and not using it.

James 2:26  For as the body without the spirit is dead, so faith without works is dead also.

2. THIS IS ALL I KNOW ABOUT WALKING IN THE SPIRIT.

A. DIDN’T KNOW ABOUT BEING DEPENDENT.

Many are taught to take pride in their independence.  They fail to see it is different when it comes to your relationship with God.   Many fall on their faces when trying to be spiritual, because it can’t be done without depending on God completely.

Most Christians, while they are willing to be dependent on God for their salvation, other things they only commit part to Him.

Malachi 2:9  Therefore have I also made you contemptible and base before all the people, according as ye have not kept My ways, but have been partial in the law.

B. THE STRENGTH OF THE LORD ONLY FLOWS THROUGH THOSE WHO ARE “CONNECTED.”  YOU CAN BE !

John 15:5  I am the vine, ye are the branches: He that abideth in Me, and I in him, the same bringeth forth much fruit: for without me ye can do nothing.

3.  THIS IS ALL I KNOW ABOUT LIFE and LIFE AFTER DEATH.

Someone who was raised only on animal fats and cheese all their lives will almost certainly receive the consequences to their diet.  It doesn’t matter if that is all they knew, or not.  The fact is, they could have eaten at someone else’s house, and seen other people more healthy than those in their family.  Whether they insist that their strange diet was all they knew or not, they will likely die from it.

A. IN THIS LIFE, YOU CAN ALMOST ALWAYS RETRACE YOUR MENTAL STEPS, BUT ONCE YOU ARE DEAD, IT IS TOO LATE.

RICH MAN COULD TRACE HIS MEMORIES, BUT HE COULDN’T CHANGE WHERE HE WAS.

Luke 16:26  And beside all this, between us and you there is a great gulf fixed: so that they which would pass from hence to you cannot; neither can they pass to us, that would come from thence.

B. LIFE IS MORE THAN WHAT MOST KNOW IN THIS MATERIALISTIC WORLD.

C. DISCIPLES LEARNED THE NATURE OF THE RESURRECTION THROUGH THE WITNESS OF JESUS.  TODAY, WE HAVE THE WORD OF GOD, AND THEIR TESTIMONIES AS GOD REVEALED THEM THROUGH HIS SPIRIT.

Acts 4:33  And with great power gave the apostles witness of the resurrection of the Lord Jesus: and great grace was upon them all.

You can try to make yourself believe that the reason you do the bad things you do is because it is “all you know.”  But, that simply isn’t true anymore.

You can say to God on Judgment Day that you didn’t get saved because living a life without Christ is all you knew—your relatives, your friends—they all rejected God’s salvation.  You might say that the religious teaching you got as a child didn’t tell you about the need for salvation and the forgiveness of sin.  You might have even developed your own home-grown religion, and convinced yourself that what you believe is justified.

Years ago several people died from drinking poison that had been put into bottles of apple juice.  The people assumed that it was O.K.  They knew the labels.  It used to be safe.  It was all they knew.  They died anyway.  God—out of His great love for you—warns you of the consequences of following all you know.  Time to learn more than that today.

Come to Him by Faith !