STRIVE FOR THE BEST 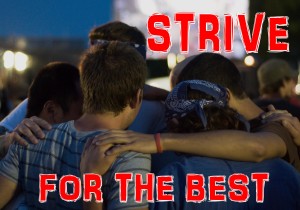 And the brethren immediately sent away Paul and Silas by night unto Berea: who coming thither went into the synagogue of the Jews.  These were more noble than those in Thessalonica, in that they received the word with all readiness of mind, and searched the scriptures daily, whether those things were so.

They LIVED their faith daily.

A. THEY RECEIVED THE WORD WITH READINESS OF MIND.

–WHAT THEY RECEIVED IS IMPORTANT. THEY PLACED A VERY HIGH VALUE ON THE WORD OF GOD. THEY DID NOT WAIT FOR DREAMS AND VISIONS OR NEW REVELATIONS.

–MANY PEOPLE WANT MORE THAN THE WORD, AND THEY PUSH THE WORD ASIDE AS IF IT ISN’T IMPORTANT ENOUGH.

IF THEY WON’T RESPOND TO THE WORD, THEY WON’T ACCEPT SPECIAL DREAMS, VISIONS, OR REVELATIONS EITHER.  Luke 16:27-31 Then he said, I pray thee therefore, father, that thou wouldest send him to my father’s house: For I have five brethren; that he may testify unto them, lest they also come into this place of torment. Abraham saith unto him, They have Moses and the prophets; let them hear them. And he said, Nay, father Abraham: but if one went unto them from the dead, they will repent. And he said unto him, If they hear not Moses and the prophets, neither will they be persuaded, though one rose from the dead.

B. THEY SEARCHED THE SCRIPTURES DAILY.

—SEARCHED. WHY ? NEEDED TO KNOW JESUS BETTER. HOW ELSE ARE YOU GOING TO KNOW HIM ? ARE YOU WAITING FOR VISIONS, DREAMS ? ARE YOU WAITING FOR SOME SUPERNATURAL EXPERIENCE TO REVEAL HIM BETTER TO YOU ? WHAT IF THOSE THINGS HAPPENED ? YOU WOULDN’T EVEN KNOW WHETHER THOSE THINGS WOULD BE ACCURATE OR NOT….UNLESS YOU KNEW THE WORD FIRST. ***SOME WAIT FOR THE SPECIAL REVELATION FROM GOD WHILE IGNORING WHAT THEY HAVE NOW–THE BIBLE !  John 5:39 Search the Scriptures; for in them ye think ye have eternal life: and they are they which testify of me.

—”DAILY SEARCHED”– (THE CHURCH DID, NOT JUST THE PASTOR OR THE SUNDAY SCHOOL TEACHERS) SOME GET UPSET AT PPL WHO ARE PART TIME CHRISTIANS FOR FAILING TO LIVE THE LIFE 24 HRS/DAY. WE NEED CONSTANT NUTRITIONAL HELP, AS WELL.

D. THEIR FELLOWSHIP AND SEEKING GOD TOGETHER MADE THE EARLY CHURCH BECOME STRONG.

Acts 2:46 And they, continuing daily with one accord in the temple, and breaking bread from house to house, did eat their meat with gladness and singleness of heart,

Luke 4:16 And he came to Nazareth, where he had been brought up: and, as his custom was, he went into the synagogue on the sabbath day, and stood up for to read.

John 18:20 Jesus answered him, I spake openly to the world; I ever taught in the synagogue, and in the temple, whither the Jews always resort; and in secret have I said nothing.

Acts 5:42 And daily in the temple, and in every house, they ceased not to teach and preach Jesus Christ.

F. THEY EXERCISED THEIR PRIVILEGE TO EXHORT EACH OTHER. WITH WHAT ? THEIR OWN IDEAS ? NO. THE WORD OF GOD.

Hebrews 3:13 But exhort one another daily, while it is called To day; lest any of you be hardened through the deceitfulness of sin.

Encourage people to do right. What is the best way ? Often, by asking them to join you !

****If the teachers and pastors are busy doing the work of the Lord, it also sets an example–exhorting people to do that. What you do in your home exhorts others in your home to do the same.

2. WHY THESSALONICA WAS WEAK.

A. THE INFERIOR, OR WEAKER CHURCH WAS GUIDED BY SELF-WILL.

(CHURCH OF THE PEOPLE RATHER THAN CHURCH OF THE LORD AT…) WE HAVE TO FIGHT AGAINST THE NOTION THAT IT IS ABOUT US. IT ISN’T !

B. WHY LAODICEA IS WEAK.

3. WHY THE CHURCH TODAY OUGHT TO FOLLOW THE BEREAN EXAMPLE.

A. WE HAVE BEEN GIVEN MUCH. THOSE TO WHOM MUCH HAS BEEN COMMITTED, SHOULD BE ABLE TO IMPART MUCH TO OTHERS.

Hebrews 5:12 For when for the time ye ought to be teachers, ye have need that one teach you again which be the first principles of the oracles of God; and are become such as have need of milk, and not of strong meat.

B. WE HAVE GREATER NEED TO KNOW THE WORD OF GOD THAT EVER BEFORE.

A VOLUNTARY LACK OF CHURCH ATTENDANCE BECOMES A FLAT-OUT REFUSAL TO HEAR WHAT THE HOLY SPIRIT SAYS, CHOOSING OTHER THINGS IN PREFERENCE TO HEARING THE HOLY SPIRIT.

John 14:26 But the Comforter, which is the Holy Ghost, whom the Father will send in my name, he shall teach you all things, and bring all things to your remembrance, whatsoever I have said unto you.